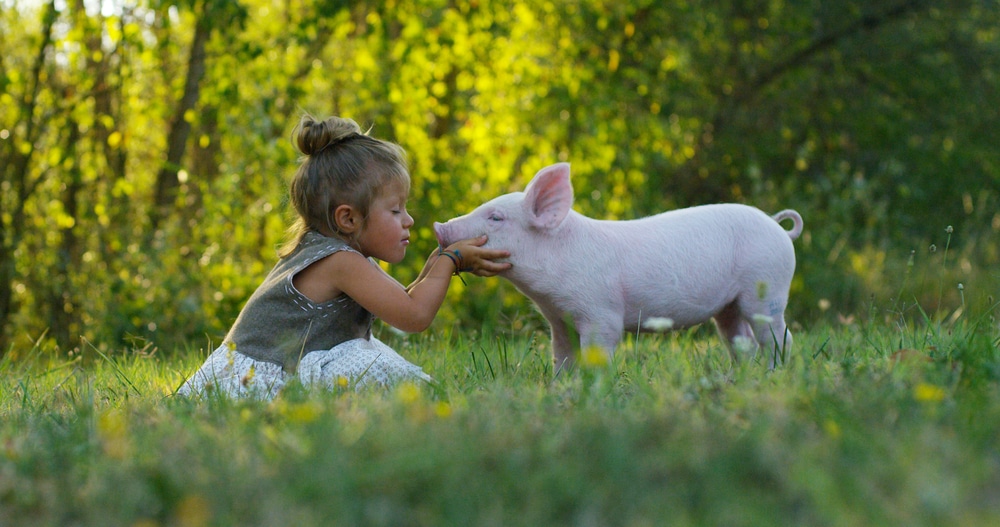 If you wanted to work to liberate both humans and nonhumans, how would you do it?

You might promote diet-focused veganism as a way to eliminate the confinement and suffering that humans inflict on nonhumans in factory farms, and to improve human health and well-being at the same time. Or you might focus on early childhood development programs that build children’s empathy in the hopes that they will end up treating other animals — both human and nonhuman — well.

While effective, neither of those strategies is comprehensive. To be comprehensive, we have to deal with the interactions of future generations of all animals — or what might be called the long-run future — which dwarf the number of interactions occurring today. One way to do that is to apply an accepted ethical framework such as international human rights. To deal with the long-run future within that system, we could combine a forward-looking and child-focused family planning ethic devised around the Children’s Rights Convention, for example, with a nonhuman-focused ecological ethic, in order to minimize the suffering and death that humans impose on animals (which will continue to increase as human population grows), and maximize self-determination for all entities.

Let’s unpack that statement a little: To be comprehensive, we have to account — at the most fundamental and irreducible level — for how all humans and nonhumans first come to exist and interact. We would have to account for who we are as a species, in terms of the quantity, qualities, relative positioning, etc., of the people on the planet, relative to the nonhuman world. Who are the people impacting animals, and who will they be in the next generation and in the generations after that? The first step in animal rights is accounting for the existential relationship, and perhaps the balance, between humans and nonhumans. It’s hard to have rights when you are extinct and hard to prevent extinction without a family planning ethic that requires preservation of the nonhuman world.

Rights Are About Protecting the Most Vulnerable Classes: Future Children and Nonhumans

And to be comprehensive and actually account for the interconnections, we have to deal with the crucial phase between the nonhuman and human world: the time-space in which humans are conceived, born, raised, and developed in particular ways, and the nexus of the nonhuman world, or a restorative baseline for environmental protection, in that process (e.g., the shortening of pregnancies due to the climate crisis). In other words, we have to account for the fundamental power humans have over the most two vulnerable categories of entities though the act of procreation: future children and nonhumans.

We would have to ensure that, relative to the touchstone of the nonhuman world, future generations are free and self-determining and are inherently disposed from the very beginning to treat humans and nonhumans in ways that promote the autonomy and well-being of every individual.

How do we know this is true? The climate crisis provides a helpful example: Study after study has shown that the most comprehensive and effective way to mitigate the climate crisis that is the greatest threat to future generations of humans is also the most effective way to protect animals: Creating and implementing better family planning laws that promote more equitable and sustainable families.

Doing so would not only reduce emissions, but would also create resilient, capable, and cooperative people able to best navigate a degraded ecology.

In other words, the poor family planning laws designed to promote economic growth to benefit elites also ensured countless children were born into poverty, abusive homes, and misery over the past several decades. This, in turn, ensured the extinction of countless species, the creation of factory farming, the onset of the climate crisis, and other examples of nonhuman suffering and death that has only skyrocketed in our lifetimes. Human population growth (which is actually a misnomer for a more complex process), or the act of having kids, was the genesis of it all.

Had we applied a standard of protecting the nonhuman world as part of the liberation of nonhumans, we humans would have evaded the climate crisis and would be much better off.

And it’s not just about population growth: Having kids determined things about our qualities (like empathy) and relative inequity that fueled the colonization and destruction of the nonhuman world. It starts, unsurprisingly, with who we are.

Being Comprehensive Means Applying a Duality

How, in practice, do we do reverse this catastrophe? Now we are back to the beginning: We can apply a simple duality. First, we can implement a forward-looking and child-focused family planning ethic, one which recognizes that creating a child is more an act of other-determination than self-determination. That means changing from the current family planning paradigm, focused on what parents want, to a paradigm focused on what children need. We can combine that ethic with a nonhuman-focused ecological ethic — which is not the “world’s environment is a human resource” ethic many mainstream environmentalists use and which precipitated the climate crisis — in order to minimize the suffering humans impose on animals and maximize self-determination for all entities.

That’s comprehensive (as opposed to consumption-based) veganism and animal rights — and the only approach truly consistent with the precautionary principle. Comprehensive animal rights is an ongoing process of constituting free societies for all. The good news is that better family planning is on trend, much more so than consumer-based and less comprehensive veganism.

Having Kids uses the duality described above to help accelerate that trend, through actions like:
• our campaign to urge the United Nations to use a human rights-based family planning model
• our campaign to reform child-welfare systems to ensure some minimum level of welfare at birth for all kids, and
• our support for recent litigation to protect our fundamental human right to the existence of the natural, or nonhuman, world and the restored habitat of countless sentient creatures.

You have a right to nature, children have a right to a fair start in life, and no one has a right to have children in abusive or neglectful conditions. Understanding these moral facts is the key to comprehensive animal rights, true fourth-dimensional (or temporalized) freedom, and a better future for all. And we can implement these truths by speaking truth to power, and transferring the resources necessary to incentivize better family planning and fair starts in life for all.

Nothing Matters More Than Who We Are Becoming

In other words, maximizing impact means first accounting for the volatility in human population growth created by our current family planning systems — or who we will be in the future — and then ensuring that we build future communities where freedom, and the suffering future humans will cause animals, have actually been accounted for. Maximizing impact means working toward a temporalized and comprehensive vision of a human and nonhuman environment — a vision of who we are to be.

This goes well beyond traditional welfarist population ethics. We are trying to liberate future generations by making them self-determining, not just accounting for our impact upon their ecology, for example. If we value agency, self-determination and humans controlling the norms under which they live, we have to create self-ruling communities — rather than archaic nation states — where those values are manifest. We have to create people with what John Rawls called a “sense of justice,” or a community of truly legal persons capable of complying with norms that protect animals, rather than relying exclusively on traditional animal protection laws that — especially when it comes to farmed animals — are often not worth the paper on which they are written.

Comprehensive animal rights would mean intentionally constituting future communities of free and equal people by cooperatively and equitably ensuring the requisite time, love, and energy for each child, so that we are investing in future generations rather than exploiting them.

This is where Peter Singer (who focused on suffering, rather than power) and other prominent animal rights theorists failed to account for the majority of animal subjugation (both human and nonhuman), the interrelation of that subjugation, and the way it is causing the social and ecological crises we are experiencing right now. They ignored the point when the interactions begin: our creation. And they ignored the need for an orienting baseline to constitute our communities. They also ignored that justifying social organization at this level prevents that subjugation, and the crises, and serves as the foundation of comprehensive animal rights.  Rights developed as a means of protecting the vulnerable from the powerful. And given that future children and nonhumans are uniquely and inextricably vulnerable, systems of rights must begin with them. Want to protect the vulnerable? Focus on the invariably antecedent, and dominant, factor: the creation of their oppressors.

How Do We Achieve Comprehensive Animal (Including Human) Rights?

There is a way forward that aligns the rights of all animals, using the nonhuman world — or the wild — as a baseline for the unified conception of a dynamic social and ecological, or human and non-human, environment. This is what that conception, which goes beyond descriptions toward a normative account of human power properly oriented from its absence, looks like: Families that invest more in each child and can create sustainable and deliberately inclusive communities; a greater voice for each person in their systems of governance as we reorient social organizations around town halls instead of shopping malls; more time off for parents; smaller impacts on the planet, wildlife, and farmed animals as we restore the wild; better outcomes for each child; and more resources to share among families so that everyone can get a fair start in life.

It’s a win-win for all animals. It’s the freedom of opportunities to do things in life balanced with the freedom from the unwanted influence of others. There is simply no coherent conception of freedom, or rights, that does not account for this dynamic alignment. In this sense, while nonhumans were unlucky in the power dynamic relative to humans, they are lucky in that their liberated world is a necessary condition for humans to be the best people they can be.

Having Kids works to move the world in this direction through what we call the Fair Start family planning model, which orients from a zero-baseline, or the nonhuman world. The work is not purely theoretical but involves very specific real-world policy changes. We can advance family planning to improve lives and our planet’s future through many avenues. Here are just a few:

If it takes a village to raise a child, it takes a village to plan for a child. Please consider promoting a universal ethic of cooperative Fair Start family planning and sustainable, more equitable families. It’s the most effective and comprehensive way to achieve a socially and ecologically regenerative society for all animals, or making sure we are becoming sufficiently other-regarding and socialized enough to actually constitute free societies. Of course, many alive today will resist doing what’s right. But in the end, it’s not about them: It’s about pushing past them toward the next frontier of social justice to save the most vulnerable and numerous category of entities, future children and nonhumans, from the intergenerational hegemony of a small minority of oppressors.

← Four Key Questions for Nonprofits or Foundations You May Support Ezra’s Dilemma: Vox Is Pushing Women to Have Kids, Which Accelerates Species Extinction and Expands Factory Farming →